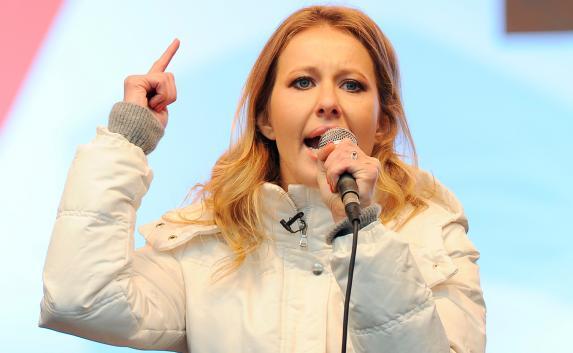 of the Photo is taken from open sources
to
by

the Question of territorial accessory Republic of Crimea took the 123rd place in spite of the fact that for several weeks Ksenia Sobchak that claimed that the peninsula "Ukrainian, and a point", declared need of carrying out honest, from the point of view of international law, a referendum. In the document Ksenia Sobchak , after all stopped on the first sounded option, however assumes that the most part of the population of the peninsula consists of Russian-speaking citizens who supported accession Republic of Crimea to Russian Federation in 2014.

In addition the journalist also declared to

need of election of "the European way" developments for Russian Federation. Ksenia Sobchak explains with geographical integrity Russian Federation with Europe. With this statement experts argued, having called it "strange" as the Urals and the East are densely crossed with Asia therefore the program quite could provide and "an Asian way".

the 89th point of the program Ksenia Sobchak suggested "to abolish" the Ministry of Culture, and the 83rd — to reduce number of HIGHER EDUCATION INSTITUTIONS with the state accreditation.

the Most disputable statement, public men counted the offer on legalization of homosexual marriages to Russian Federation: "It is necessary to make changes to the legislation, legalizing conclusion and cancellation of the voluntary civil unions between full age regardless of their floor and religion".

Ksenia Sobchak about a freedom of speech to Russian Federation

In a root the deputy Vitaly Milonov which declared does not agree with it that the presented Ksenia Sobchak the program in a root differs from vision of Russians. Respectively, Russian Federation she will not achieve support in ranks of the majority of citizens.

"An election program Ksenia Sobchak — this frank treachery of national interests. Couple more of such "successful" PR courses, and Ksenia Sobchak becomes the person for whom one person" will vote — Vitaly Milonov summed up.